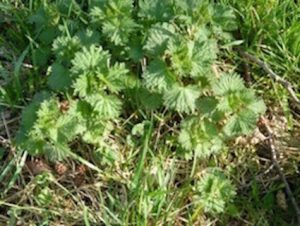 It is because of plants such as the noble stinging nettle that I have great pride in my art as a Western Medical Herbalist! The nettle is so common that it is taken for granted and even regarded as a pest to be cleared, destroyed and controlled. At best it is put on the compost heap or made into a natural liquid fertilizer, but this overlooked plant is a powerhouse for healing.

Urtica dioica, along with its not so common and smaller cousin Urtica urens, are true natives to Britain. It is widespread and abundant in every sort of environment, particularly waste and cultivated land, wet woods, hedge banks and river valleys. The best time to gather it is in the spring and early summer, picking after the month of June should be avoided as it becomes coarse and bitter and more laxative in its action.

The nettle has two distinct healing parts: the herb, which is all the plant from the ground upwards, and the root. The root is an anti-prostatic agent and is used specifically to improve symptoms of benign prostatic hyperplasia (enlarged prostate).

Nettle herb is one of our greatest detoxifying plants. It increases urine output eliminating waste, especially urates, which makes it excellent for problems such as arthritis and gout; with its high and easily-absorbed silica content, it is used to help with connective tissue repair and regeneration. Its cleansing action helps skin problems such as acne, eczema and psoriasis.

Nettles can slow or stop heavy bleeding, especially heavy menstruation and due to its high iron content it will help with anaemia, which often accompanies chronic blood loss. Nettles also have an anti-allergenic activity making then effective for allergies such as hay fever, asthma and ironically, nettle rash (urticaria)! They are also hypoglycaemic and are effective for lowering blood sugar levels, making them a useful addition in the treatment of some types of diabetes.

Being a greedy plant, nettles’ extensive root networks take up large amounts of nutrients from the earth, which gives them a high content of iron, vitamin C, A, calcium, silica, histamine and chlorophyll for example. So a drink of freshly picked nettles brewed as a tea, make an excellent spring tonic at this time of year.

Nettles and people are old friends; as well as its many healing virtues, the stinging nettle is one of the most common edible plants. It has been used throughout time as a nutritional vegetable, even today it can be found in the most elite restaurants where it is having a revival in its popularity as a wild food and can be used in a number of ways. Its fibres are very similar to hemp and have long been used for making string, rope and cloth. In the Second World War, hundreds of tons were gathered in Britain for its chlorophyll and to make dyes.

It had been said that Roman solders brought their own nettle species with them called the Roman nettle – Urtica pilulifera, but the absence of Roman nettle seeds, and the abundance of common and stinging nettles seeds that the archaeo-botanists have found at archaeological settlements, suggests that Roman nettle was not cultivated here in Britain.

In old medicine, the nettle sting itself was used as a remedy for joint pain. The effected joint would be flayed by the nettle, which would draw the infection and pain away from the joint. I’m glad to say this is little practiced today.

In folklore, nettles are said to give courage in times of danger, save a house from lightning, cure dog bites and baldness. Nettle oil preceded paraffin and the juice will curdle milk in place of rennet. Fruit packed in nettles would last longer and the juice could be used to seal cracks in leaking tubs and barrels. Bunches of nettles were hung up to increase egg laying in hens, keep flies away from larders and frogs away from beehives.

This I think is one of the most pleasant ways to enjoy nettles. Salute!

Boil nettles with the 12 litres of water for 15 minutes, strain and add sugar and the cream of tartar. Heat and stir until dissolved, wait until warm and then add the yeast and stir well. Cover with muslin and leave for 24 hours. Remove the scum and decant without disturbing the sediment. Bottle, cork, and tie down; leave to ferment for 4 days.
This is a light and refreshing drink perfect for warm summer evenings to come.
(from – Wild Foods by Richard Phillip)

Here is this month’s poem by Nadia Kingsley: To see more of Nadia’s works and projects visit her web site at fairacrepress.co.uk

Can you believe – how any leaf
let alone a maligned one

can harness a Star, how constant change
is behind evolution

or how, despite
dragging its rootmesh clear from the earth,

Add swathes of nettle to bucket, add water, then
make doubly sure the lid is on tight.