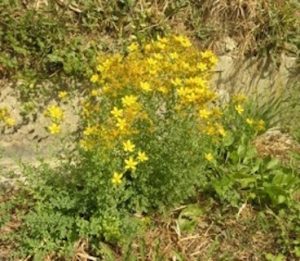 St John’s Wort has naturalized in the UK and is widely found throughout Britain, Europe and Asia. It can be found on roadsides, banks, and hedges, open, dry places and prefers chalky soil. It flowers in summer to early autumn.

This is one of the Herbalist’s great power herbs and is one of our few herbs that has been well researched and embraced by the mass market, which is not always a good thing for us Herbalists. This is because plants used in research are standardized on a marker compound and do not represent the complex chemical components found within the whole plant; this can lead to it being associated with side effects which would be less likely found in the whole plant preparations that Herbalists use.

On the positive side, research has found that extracts of Hypericum to be as effective as antidepressants of the class known as SSRI’s (Selective Serotonin Re-uptake Inhibitors) without the unwanted side effects of those drugs. Indirect evidence does show the possibilities of interaction between some prescription drugs and St John’s Wort, so much so that the Committee on Safety of Medicines in London, March 2000, issued recommendations of caution to practitioners and the public; so if in doubt, consult your herbalist.

As well as its antidepressant action, St John’s Wort is also used topically as an antiseptic and analgesic (painkiller) for burns, wounds, bruises, itchiness; it is a specific for Herpes Zoster and shingle’s rash.

As you can see, this is a most effective and useful plant to have on our doorstep. Its medical uses are ancient and it’s no wonder that in folklore this plant is steeped in superstition and is associated with religious and magical powers.

The name Hypericum was originally given by the Greeks, meaning ‘over an apparition’ the plant was put above figures or icons of the person or thing to be protected, usually against evil sprits and witchcraft, a tradition which is reflected throughout the continents in which it grows.  Perforatum is on account of the leaves, which look perforated when held up against the light. The golden pockets that are seen are not perforations but tiny glands of oil held in the leaves. This is a very good way of identifying the medicinal variety of St John’s Wort from the many other types of Hypericum with which it can be confused.

Here is a little ditty I found translated from Gaelic:-

My envy whosoever has thee,

I will pluck thee with my right hand,

I will preserve thee with my left hand,

Who so findeth thee in the cattle fold,

Shall never be without kine.  (cow)

It first flowers around about St. John’s Eve (June 24th) Its ruby red oil and bright yellow flowers are symbolic for the mid-summer and for the solar fire and blood representing the Baptists’ martyrdom and the patients’ wounds.

No one should be without a bottle of St John’s wort oil in their medicine cupboard, Its beautiful colour and abundant healing qualities makes this a joy to make and delightful to use.

Here is a very simple and effective recipe from my most revered herbalist and teacher H. H. Zeylstra 1999:-

Steep in 250ml of oil – sunflower, corn or almond.

Stand for at least 6 weeks in full sunlight.

Shake occasionally during the steeping time.

Strain through muslin and into sterile bottles.

It will keep up to a year in a cool place away from sunlight.

Use topically, as required.

Here is our regular herbal poem from the lovely Nadia Kingsley fairacrepress.co.uk

If your child
If your child suffers from wetting-the-bed
it might be something primal: a fearing
of ghosts or monsters – so I  suggest
you harvest  Hypericum perforatum – hang it
in their room and the dreadful whiff
of turpentine will rid both cause and effect.
If this doesn’t cure, pour them its tea at storytime.
But if this fails, then treat yourself: let sunshine-flowers,
from the weed St John’s Wort, plug your flooding depression.