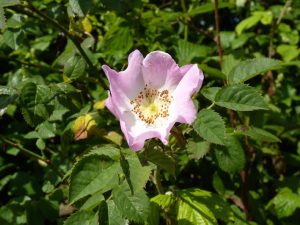 I could not let a British summer pass without giving a mention to the Rose.  Its sweet uplifting fragrance and delicate beauty has long held this plant close to our hearts. The phrase English Rose is still used today to describe the typical beauty of an English girl.

There are a great many varieties of rose used in healing, culinary arts, beauty products and crafts; many more which have been bred simply to adorn the great British gardens.

Dog Rose – Rosa canina is the most ancient rose species used; as in so many cases in herbal medicine, the oldest variety of a plant family is the most powerful in herbal medicine. The Hips of this rose are greatly valued for their vitamin content, not only containing large amounts of vitamin C which helps our immune systems, but also containing significant amounts of Vitamin A, B1, B2, B3 and K. Herbalists use these for sore throats, coughs, colds, flu, general debility, diarrhoea and stomach upsets, especially in children. In Roman times, this plant was used for the bites of rabid dogs which is probably where it got the name canina being Latin for dog. When using the hips, the fresher is better and it is said that they should be collected after the first frost, as this helps with the extraction of the nutrients within.

Rosa Gallica is used for its petals. This plant is native to the Middle East and not now found in the wild. It has been cultivated for at least 3000 years. The essential oils found in the petals is still widely used in aromatherapy and herbal medicine as a mild sedative, antidepressant and anti-inflammatory healer, as well as lowering cholesterol.

Rosa Centifolia or Cabbage rose is used in the production of French rose oil and has a reputation as an aphrodisiac.

Rosa Damascena has its petals steam-distilled to produce Bulgarian rose oil used in 96% of all women’s perfumes. Medically, we use this rose to lift depression, sooth the nerves and anxiety; we herbalists call this rose the herbal HUG and give it to those who need a little extra love in their lives. Recent research suggests that this oil may also anti-HIV activity.

Rosa Rugosa is used by the Chinese as a blood tonic and to relieve stagnant liver energies.

The rosary is supposedly so called because in the middle ages rose hips were used to count the prayers as they were said.  In Sufism the rose was the most powerful healer of all the plants. Tradition states that at the beginning of the world God created the soul of prophecy which burned so brightly that it began to perspire and from this grew the rose.

The Rose is the national flower of England dating back to Henry VII who introduced the Tudor rose which combines red and white roses symbolising two great families as a symbol of unity after the great civil war.

The rose and the rose symbol have been used in history and folklore countless times, far too many to mention them all here. So I will end with one of its most important symbols which is that of true love.

Here is a simple recipe to bring a little herbal hug into your lives:-

Gather a few ounces of Rose petals and put them in a bowel of spring or rain water.

Soak for a day and a night.

Decant the liquid into a glass container.

This can be used on the skin, in bath water or just sprinkled on fresh linen for its sweet fragrance.

Rosa canina
In this wild dog form, most common rose of Britain –
flowering, first in June, one hundred and fifty million years.
A simple bloom – five pink petals – stamens not modified,
fertile and abundant – add strawberries and mint that blend
nearby, for a hint, for a flavour of the far-off Orient. Thorns
that are prickles; thorns sharp and curved – reminding men
of trusted blade held belt-close, ready to protect; thorns that drag
the whole to the light, arcing, arching, out from hedgerows.
Then, at autumn, when all is closing in, look: hip flames.
Gather them for your store cupboard. Hold the cure to the cold