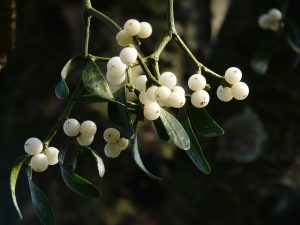 Welcome to my first herbal blog. Each month, I plan to introduce a different medical plant which can be gathered in that particular month. I will share with you its medical value and – where appropriate – its folklore history, culinary uses and any other useful tidbits I may come across.

The idea behind this is to bring to light the amazing wealth and use of the plants which we are privileged to have right here on our doorstep.

Starting with December and its ancient customs and folklore, I have many herbs to choose from which are associated with the Yuletide traditions. Mistletoe, I think, is an obvious choice for this month, as it is widely used in modern herbal medicine and also has a long history in folklore and religion.

As a medical herb, it should only be used by a qualified practitioner. We use the leaves, twigs and berries as a tranquilliser and cardiac depressant, to soothe the nervous system and reduce heart rate whilst strengthening the blood vessel walls. It is used for raised blood pressure, nervous quickening of the heart, sleeplessness, hyperactivity, twitching, dizziness, fatigue, arteriosclerosis, headaches and much more.

A native to the British Isles, mistletoe grows on the branches of trees, especially apple and oak. It is considered to be among the world’s most mystic plants, and has been well-known since the time of the druids who used to cut it with golden sickles and catch it with white cloths before it hit the ground. It was then hung over doorways as a symbol of peace and hospitality and as protection from lightning and evil spirits. Used in the celebrations of both the winter and summer solstice, it symbolised new life, and because of these druid and pagan associations it has been known to be banned from churches.

It is deemed lucky to keep the mistletoe used during Christmas through the year until the following Christmas, where a sprig was burned on the Christmas pudding. The druids also used it for fertility, and this is from where the custom of kissing under the mistletoe for luck probably originated.

So grab a piece of mistletoe for luck and I wish you all a very merry Christmas.