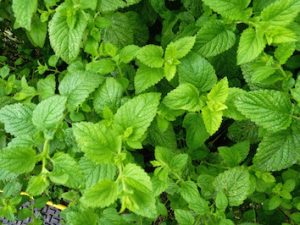 Lemon balm is not one of our most beautiful herbs to look at, but what it lacks in appearance it certainly makes up for with its most wonderful sent. Its refreshing, light lemony fragrance encapsulates the warm summer days in which it flourishes, it makes a most refreshing light tea which is perfect for these long summer days served hot, or cold with a little ice. The light lemony taste is best when the tea is made from freshly picked herb.

Lemon Balm is widely used by herbalists either as a tea or as a stronger tincture. It’s a very calming soothing herb which we use to reduce fevers in colds and flu. It has strong antidepressant properties and its calming action soothes the nerves and has similar effects on the digestive system, easing digestive spasms and heartburn. It reduces stress and anxiety, lowers blood pressure and has an overall tonic action on the heart and circulatory system.

This plant is native to South Europe especially in mountainous terrain, but it naturalized in the South of England, and was introduced into our gardens at a very early period. The name Melissa comes from the Greek word meaning Honey Bee as the flowers have a great attraction to bees, so much so that it is said Lemon Balm should be planted near bee hives to keep them happy and prevent them from swarming. Also to rub the whole plant into a new hive would help the bees settle in their new home.

Wash and chop the herb leaves, adding to the spirit with the pounded seeds and cloves and grated lemon rind. The cloves should be measured whole, but ground before adding. Leave to steep, swirling daily for 6-8 weeks. Filter and sweeten to taste with approximately ½ – 1 cup of sugar per bottle, label and leave to mature.

A soothing liqueur for troubled sprits.

Here is this month’s poem by Nadia Kingsley:

Instead of writing a poem about Lemon Balm, I read
that it’s a member of the Mint family, that its genus means Honey Bee,
and it’s called officinalis – so that, like the common dandelion,
its many variations are all placed, under the one name;
that a Mr. John Hussey, who was buried in 1748,
breakfasted two thousand times – only on tea from its leaves
and nectar from its small white flowers – died a well man
at a hundred and sixteen; that a Mrs Frances Bardwell,
in her 1910 ‘The Herb Garden’, wrote though ready when sought,
its leaf odours do not force themselves upon us; that in 2004, Kennedy D.O.,
Little W., Scholey A.P. published, that after the administration of a 300mg dose,
significantly increased self-ratings of calmness, with an increased speed
in mathematical processing and no reduction in the accuracy, was noted.
I then drove – to a Planter’s Sale at Whittington Castle, exchanged three coins
for a pot of twelve stems: like a gentle mint – leaves lighter, more rounded.
In its planting up I found that Bardwell was correct – it won’t reveal its scent,
when I’m weeding its bed, not like mint. I pick six lower leaves, crush them
in my fist, then steep, in a porcelain mug. I fill a Sudoku grid, with pen,
in the time it takes to drink. Then, I record – and it doesn’t need sweetening