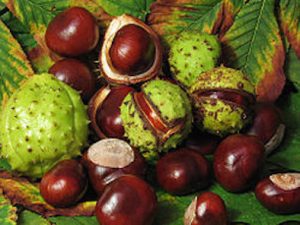 While scrunching through the dry colourful tapestry of autumn leaves in November, there are treasures to be found under the horse chestnut tree. I like to prize them from their spiny pods while they are still new to the day. These beautiful, shiny, rich ruddy brown conkers still bring me joy when I find them fresh, as they did when I was small, as they still do and have done, for millions of children and adults alike across continents. When I was young and eager to find the biggest one, which would be a winner in the school playground conker fight, I then had no idea of the healing properties locked within.Caution must be taken when using these seeds for medicine, the correct preparation and dosage is imperative. Luckily, due to their dreadful taste, harm from incorrect ingestion of conkers is very rare. Warnings aside, the correct preparation of the conker is extremely effective in treating problems concerning veins and the venous system. Horse chestnut has a unique action of strengthening and toning the vein walls and so is especially good for the treatment of varicose veins, piles, phlebitis, swollen legs, leg ulcers, chilblains, night cramps and more! Symptoms of heaviness, tingling, pain, itching, tiredness and coldness which is associated with poor circulation of the legs will also be alleviated. The cream used externally has also been found to be useful for cosmetic problems such as cellulite and ageing skin.

The horse chestnut is native to northern and central Asia, from which it was introduced into England about the middle of the sixteenth century. The name Horse Chestnut comes from its usage to treat horses for chest conditions, as this is a direct translations from the Latin name Hippocastanum. In Eastern countries they are used for cattle food and allegedly relished by cattle but not by pigs! Not being poisonous to any farm animal within the limits of what they can be encouraged to eat, they are found to form a highly nutritious food for them. In the Great War, experiments showed that for every ton of Horse Chestnuts harvested, half a ton of grain can be saved for human consumption. So although totally unfit for human consumption, Horse Chestnuts can be used indirectly to increase the national food supply. Along similar lines, conkers were sought during the first and second world wars for military purpose. The need for acetone essential for the manufacture of cordite, became great as usual sources had become erratic and costly. It was discovered that the starch content in conkers could be used for such a purpose, so much so that groups were organised nationally to collect them for the military.

So comes the name conkers.

The tradition of conker fights is a very English one. Children from other countries prefer to make small animals from them.

Here is a simple recipe for Horse chestnut gel which works wonderfully when used externally on varicose veins. Taken from – Grow your own drugs, by James Wong.

Prepare the tincture first, then use to make the gel. Tincture and Gel should only be used for external application.

1 – Blend the conkers and vodka in a liquidizer until smooth.

2 – Place in a sterilized bottle and keep in a cool dark place for 10 days to 1 month shaking every day. Strain before using. Keep for up to 1 year.

1 – Add the vegetable gelatine to150ml of cold water in a pan and whisk until dissolved. Heat for about 2 minutes, whisking constantly. As the mix begins to thicken, slowly pour in the horse chestnut tincture a little at a time. Add the lavender oil.

Try a 24 hour patch test before using. Apply to the affected area twice daily, or as often as required.

The Gel keeps for 3 month in the fridge.

Know-how
His Mum still calls him Billy.
In the classroom he’s called Spratt.
Nine years on this planet.
Small for his age. Intelligent.
The bullies in the playground
have always called him Brainiac.
Worse names too –at least they did, until,
behind the bike shed
they form a queue, fidget a bit,
horse chestnuts readied – on
laces, on strings – an illegal act
without safety glasses.
One after one, they back away,
their champion buckeye in tatters.
In-cred-u-lity on their faces: it’s not as if
he has the moves. Certainly not the muscles…
They beg to be taken out to the park,
their hands will soon be bloodied,
by prising open spiny vessels
they too will carry pale brown scars.
They search for answers on the web:
oven-baked, or varnished? No! Now known
as William the Conkeror, it’s thanks to one
– handed down by his Grandad.
Ssssh ! Don’t tell anyone !!