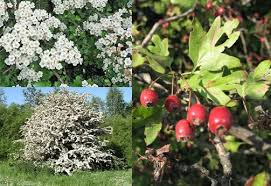 I can’t believe it is May already, and what a fabulous month for herbalists it is! May is the month of the flowers, in the heart of the growing season; it brings with it an explosion of colour with new leaf, blossom and a myriad of flowers. So, what better herb to have for May than hawthorn, also known as the may tree?

One of Britain’s native trees, it is a very common hedge plant throughout Britain, and is also found in all the temperate regions of the northern hemisphere, including North America, Europe and Asia.

Its dried flowers, leaves and berries are used in herbal medicine for heart and circulation problems such as heart failure, weakness of the heart muscle, raised blood pressure, arteriosclerosis, Buerger’s disease, tachycardia (rapid heartbeat) and angina. Hawthorn is an impressive heart tonic. It is able to stimulate or quieten the heart activity depending upon need, and dilates the heart’s blood vessels, increasing blood flow and stabilising the contraction of the muscle. It is also used for diseases of the circulation, like intermittent claudication and Raynaud’s disease.

Hawthorn is the most prominent of trees in the landscape when it blossoms in May, and so its most popular name is the may tree (it is the only plant named after the month in which it blooms). “Hawthorn” itself it is the most popular tree used in place names.

In history, it was used to make garlands along with other flowers, which were set in the ground outside the house – but, according to folklore, it was unlucky to bring the flowers into the house. This, I think, is due to the fact that the flowers contain a substance (trimethylamine) which has a distinct scent and is also formed when a body decays. Another explanation could be that at the time of year when May blossoms are out, there were often a lot of chest and throat ailments because of the pollen, and so people connected their ill health with hawthorn or may blossom, which was often brought into the house for decoration. It is also thought that Christ’s crown of thorns was made of hawthorns.

In Cheshire, it is said that hawthorn blossom should not be cut, as this causes a poor apple crop due to depriving the bees of a main supply of pollen.

It was used extensively in May Day celebrations; although it flowers closer to the middle of the month, it used to flower at the beginning of the month before the Introduction of the Gregorian calendar. May flowers also have a reputation for protection. In Ireland, it was often used for this purpose; when sprinkled with holy water and stuck down in the village fields, it would stop the faeries from ruining the crop, and a portal to the faerie world was often found in a hawthorn bush!

There is a variety of hawthorn which produces flowers in winter as well as late spring each year; this is the Glastonbury hawthorn, or holy thorn. Legend tells us that Joseph of Arimathea arrived at a hill overlooking Glastonbury Tor with a few disciples and two cups containing the blood and sweat of Jesus. It is said he thrust his staff into the ground where it sprouted and grew into a hawthorn which flowered in the winter, thus proving its holiness. Although the original is not there today, one of its supposed descendents remains, and cuttings from this tree have been found growing around Glastonbury and beyond.

My mother once told me that she used to eat the young leaves; she and her friends would call them “bread and cheese”, as they were so satisfying, and they were also eaten by adults in times of hardship. The blossom and berries were commonly used and made into wines and jellies. So, here is a recipe for mayflower brandy:

Ensure that your petals are free from bugs and put them into a large, clean jar or container with a lid. Add the brandy and give it a good swish. Now store the jar in a cool cupboard for 3 weeks, swishing it around once a week. After this time, strain the brandy through a fine sieve or muslin into a jug.

In a pan, heat a cup full of water with a cup full of sugar until the sugar has dissolved. Now you can use this sugar syrup to sweeten the may brandy. We suggest you add a bit at a time to the jug of brandy, stirring and tasting until you think it is just right.

Store for nine months before drinking, as the flavour becomes mellow and almost chocolaty.

May  the only plant named after the month in which it blooms – Hawthorn.  Spreading from Glastonbury Staff,  fast as a Redwing, tenacious like gossip – its flowers,
with their five white petals
cupped for a fairy, are lunch
for a dormouse. Its leaves
are Bread and Cheese, an all-day

munch for moth larvae. Haw –
old word for hedge;
its thorn makes medicine
for its own pricking.
Barring it from our house,

Granny said it brings Death.
In that, lies this – the compound
that gives off its scent is also released
from rotting flesh.
“Shed not a clout ’til May is out “-

though with the calendar alteration
some time back, she can’t have been sure
what she meant. And we, in our youth,
on unseasonable April afternoons
would sunbathe right under her nose.