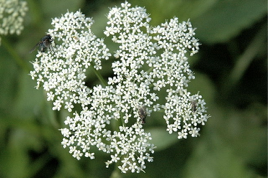 Here is a wonderful blog from John Handley, a naturalist and friend whose website will soon be a must-see:

I marvel at the synanthropic ability of Ground-elder, a plant that is well suited to live together with us. Often on the outskirts of inhabited areas, it has invariably arrived there because of us, and marks the land where two worlds meet: the natural world and where our influence is total.

While some authorities suggest that the plant was introduced to Britain by the Romans, others propose that it appeared here in the Middle Ages (probably brought in by monks used to cultivating it in monastery gardens on the European mainland, primarily for medicinal use) and was grown as a vegetable.

It obtains many of it’s names from its association with both monastries and the medicinal purposes to which it was put, such as: Ache weed, Bishops goutweed, English masterwort, Goutweed, Goutwort, Housemaid’s knee, and Wild masterwort. The number and variety of these names help us understand how valued this plant was and why it was brought here, planted and encouraged to grow.

Ground-elder is a member of the Apiaceae Family. The Apiaceae are one of my favourite families: in the process of gathering the flowers together evolution has crafted appealing landing pads for a wide variety of invertebrates and on a sunny day, when any member of this family are in bloom, you’ll be treated to a succession of beetles, hoverflies, bees and flies all busily gathering nectar or pollen.

The best way to forage with confidence is to get to know the leaf shape. Ground-elder has ‘ternate’ leaves – divided into three more-or-less equal parts.

Ground-elder’s rhizomes make it difficult to eradicate; the rhizomes break easily when the soil is disturbed and a small piece is enough to start a new plant. Ground elder often forms dense stands which exclude all other plants. One plant is enough to create such complete shade with its densely-packed leaves that no other shoots can grow.

It makes a great food plant because it grows so abundantly and no matter how much you forage you will be extremely unlikely to eradicate it. Ground-elder is easy to forage: collect the young leaves and use them as you would spinach, wilted down with a little knob of butter. They have a flavour that is reminiscent of parsley and the texture of the young leaves is a little more resistant than spinach but less tough than a winter cabbage. The leaves become leathery as the plant gets older, therefore generally a good plant to use in the early spring. 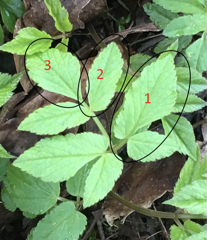 The ternate structure of a compound Ground-elder leaf

And here is this month’s poem from my good friend Nadia Kingsley:

What have the Romans ever done for us?
They may be known for their aqueducts, and obviously
the roads – but when they came they also dropped
snapped-off lengths of Ground Elder rhizome
with covering of dirt to grow and feed the stomachs
marching, marching upon these spreading routes.
No one in England, and I mean no one, not in this age
and not on any day in February, should starve
thanks to them: for its stems in soup, in pasta, or
as salad will stave off scurvy, keep the eye sharp,
knit your bones dense, and give blood its oxygen.
And to all modern moaning gardeners, with a toxic
fear of its marvellous tenacity – as it peeps its green
from out of winter’s earth, conquer it via your digestive
system to spare the muscles of your back, but know
come summer you will mourn their lost white parasols.