Sambucus nigra – Elder – Herb of the month for October 2015 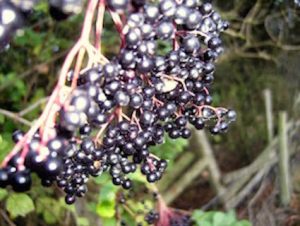 With its flat toped mass of creamy-white delicately fragrant flowers which are followed by large, drooping, purplish-red, shiny, juicy and generously abundant berries. Elder is a familiar plant which plays a large part in the make up of the typical British countryside.

This is a common herb and well known to most people. It is found in hedgerows, woods, coppices and waste places throughout England, Ireland and the whole of central and southern Europe.

No plant is more highly respected in European history for its medical properties then the elder.   Nearly all parts of the elder can be used for healing – buds and flowers, which are collected in the spring; the berries collected in the autumn; the bark in the early spring before the leaves appear and the leaves are collected in May. It is said that the English summer is not here until the Elder is fully in flower and that it ends when the berries are ripe!

In modern herbal medicine, the flowers are mainly used for treatment. Made into a hot tea, elder flowers can bring down a fever by bringing on a sweat, which in turn reduces the body temperature, helping to heal the miserable infections that tend to linger on.  Elderflowers specifically gravitate toward infections of the respiratory system; they have an expectorant action on stubborn catarrh and relieve congestion of the lungs and soothe branchial conditions, which along with the action of reducing fever, makes this an ideal herb to be used for coughs, colds and flu.

Elder berries, leaves and bark are used to reduce inflammation and especially infections of the mouth, pharyngitis, mouth ulcers, and as an eye wash for conjunctivitis. These plant parts also have a strong diuretic action, which makes this a sound herb to use in oedematous conditions such as dropsy and water retention.  The bark and berries also have a long established effect in regulating bowel activity, helping in both diarrhoea and constipation.

Due to its ancient and well established healing reputation, Elder has a wealth of folklore, romance and superstitions centred around it. The most well-known of these, and still used today, is that it is lucky to plant elder and unlucky to dig it up. In most countries it was connected with magic. In its branches there is supposed to live a Dryad or nymph which is called a Hylde-Moer, or Elder tree Mother who watches over it. When and if the Elder is cut, the Elder Mother who lives in it accompanies the wood and the furniture made from it and it would warp, crack or break. It was never used for ship building or meat skewers and farmers were reluctant to use it as a switch to drive their cattle. Whoever needed to cut it down has to first make this request to her:-

‘Lady Ellhorn, give me some of thy wood, and I will give you some of mine when It grows in the forest’ This would allegedly insure the safety of the wood cutter and the wood so he may go ahead with his task.

The pulp in the centre of its wood was very easily removed, it is so soft it can be pushed out. Consequently, it made perfect wood for flutes, pipes and pop gun toys for small boys and it is said that Pan’s pipes was made from Elder.  In Low-Saxon Elder was Ellhorn or Elld (Aeld) meaning fire, as the hollowed stems of the young branches would be used to blow air into the fire. Sambucus is found in writings of Pliny and other ancient writers. Adapted from the Greek word Sambuca, the Sackbut, an ancient musical instrument that was widely used by the Romans. There are many more traditions and superstitions connected with this ancient plant, too numerous to mention them all here.

Here is a real treat for you all, to help see you through the cold, dark month ahead.

Boil the stalked elderberries gently for 20 minutes in a preserving pan with 550ml of water. Put sugar, raisins and spices (cut the ginger into pieces) into an earthenware crock or fermenting bucket. Strain the measured elderberry juice onto the dry ingredients and make up to 4.5 litres with boiling water.

When it has cooled to blood heat, float a slice of toast spread with the yeast on top. Leave covered for 24 hours. Remove the toast and stir. Leave, covered, stirring twice daily for 14 days, strain and pour into a demi-john fitted with a fermentation lock. Protect as for red wines.

Elderberry wine
At the clang of the springed lock finding its home again, chains that were now,
suddenly, are not – no breaking free from the projected sales spreadsheets, no melting
away of the learning curve of business, a curve so vertical I find that I have almost
fallen backwards from the weight of it all – no, this is more like magic.  Sheep fill the
green grass – the sheep watch, as still as the air, as I walk to the elder laden with
berries. A purple so black they’ll rejuvenate hair, leaves that smell of cat’s piss.
Armed with scissors, I stretch up to them, cut, stretch again, cut, then finding a
rhythm it’s a stretch, cut cut cut cut, and on to a gathering up. So many, I smile.
And some make my heart race – for those stems are red, as if stained by the berries
that hang like a mother’s breast on the day their child leaves home. I am already drunk –
on the joy of it all, sober too at the luck of the draw and at the thought of my mother,
now dead and cremated, who’d be glad that she’s both my cause and effect.