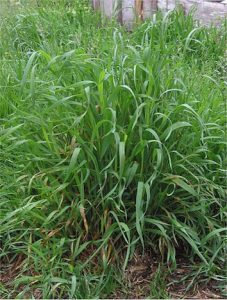 February is the month to collect the rhizomes for couch grass.  Being a gardener I know this plant can be a real pest, difficult to clear and doesn’t have much of a place in anyone’s garden!

Being a Herbalist, I love it! I have a special place my garden where I let it grow to its little heart’s content not just for collecting but also out of respect for this great plant healer.

Couch grass is one of the most important herbs we have in our apothecary. Its soothing, cleansing action is valuable when treating infectious conditions of the bladder, prostate and urinary tract and is widely used in cases of cystitis. It is also a good blood cleansing herb and can used in ‘Spring cleaning’ mixtures and also has a place to play in treating gout, glandular swellings, liver and rheumatic problems.

Being such an invasive plant, couch grass if found in Europe, Asia, North and South America, Mediterranean to Arctic Regions, abundant in the British Isles, and Australia. It grows in every type of soil.

The most famous herbalist Culpepper says of this herb “If you know it not by this description, watch the dogs when they are sick and they will quickly lead you to it” and “Although a gardener be of another opinion, yet a physician holds half an acre of them to be worth five acres of carrots twice over.”

Its not just dogs and cats who seek this herb in time of sickness, also cattle, sheep, goats and horses eat the couch grass in the early months of spring, especially when they are put out to pasture after a prolonged time indoors. Herbal medicine is the only therapy (apart from preening in other primates) which is also practiced by animals. It is interesting to note here that the rhizomes are knotty and tuberous in early spring but in Summer these bulbs lose their shape and form. So now is the time for people and animals alike to seek out and collect this most useful plant.

In times of famine, couch grass rhizomes have been roasted and ground to be used as a substitute for coffee and flower.

Gather the rhizomes now and dry them out so they can be added to other herbs when they are in season and made into a detoxifying, cleansing spring tonic.

Here is a poem by Nadia:-

Open letter to all of England’s Farmers: on Agropyron repens

We all know of Couch-grass, know the irony in its name. A bane.
Flourishing only in toiled soil: our fields are being overwhelmed
by its slender creeping  underground stem, the smallest piece left
will vegetate (another slang term used in the human lounge, but
in botanical terms: soon developing lateral branches, nodes that hold
both roots and leaf-buds, our crops outnumbered by this beardless
wheat impersonator). Be reassured. Call on the country’s herbalists!
Let them loose in your empty fields midwinter, ahead of your next crop –
Imagine the teamwork! They desire exactly what you aim to eradicate.
They will gather its vivacious roots, even eat them like licorice!
If still in doubt, read up on Culpepper – ” Although a gardener be
of another opinion” he says, “yet a physician holds half an acre of them
to be worth five acres of carrot, twice told over.” Look to the wild,
see how everything’s interlinked – Humans too, should co-operate.
Or be prepared to lay your land to pasture for some years
let the close-growing Grasses smother the Agropyron Repens.
Be aware. That without taking one of these measures, this grass will turn
you mad. Soon all you will do is play at the ancient child’s game:
sticking head of one into another still on its stem, while reciting, over
and over till you’re dead, “Grandmother, grandmother jump out of bed.”