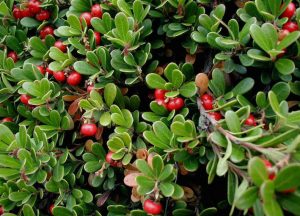 This month herb is little known to most people in England; although still native to the UK, it is found in the Northern latitudes and high mountains of Europe, Asia and America. In the British isles it is common in Scotland, on heaths and barren places in hilly districts, especially in the highlands and can be found as far south as Yorkshire and on the hills of the north-west of Ireland.

This is an evergreen dwarf shrub with long rooting branches which form a dense mat. It has flat, leathery leaves which are the parts used for medicine, and can be collected throughout the year, but preferably in the spring and summer. Its clusters of whitish pinky flowers turn to red glossy berry-like fruits in the autumn and provide a food for grouse on the moorland. The latin names uva-ursi literally means bear’s grape and comes either from the notion that bears enjoy eating this fruit or from its very rough, unpleasant taste which might have been thought of as only fit for bears to eat.

Bearberry has been used medicinally for at least hundreds of years. Medical references for it are found in the 13th century in Wales and by the 18th century it was well used by orthodox medicine throughout Europe.

Today, Bearberry is widely and regularly used by modern herbalists. It is specifically used in the treatment of cystitis. Its powerful antiseptic and astringent effect on the urinary system make it a very useful plant to use for infections, gravel or ulceration in the kidneys or bladder. Its action will sooth, strengthen and tone every part of the urinary system. A very valuable plant indeed.

Native Americans use bearberry leaves mixed with tobacco and other herbs. When smoked in a sacred pipe, they believe it will carry their prayers to the Great Spirit. The leaves are also used for bluish-black dyes in Scotland and a grey and black dye in Norway and Sweden.

As this is such an attractive looking plant, you may like to try growing it. Its natural habitat is cool, so find a north facing wall or bank and grow on the top so it can naturally sprawl. It likes an acid medium, so will benefit from being buried in a tub of its own soil; this way it can be set alongside other herbs with an alkaline preference. Let’s bring this little treasure into our gardens and hearts and get to know it a little better.

like transmogrification or mandatory,
is one of my favourite words – not because
of its meaning but for how it rolls around
my mouth. And here it is again, in a description of
the Bearberry, so I finally reach for the dictionary
find its origin is from the Latin – that it means
to lie down, or to take to one’s bed.

Uva-Ursi, or Bear’s grape, is found on Yorkshire Moors
and trails its evergreen branches across the wilds of Scotland.
Culpepper said that it’s named either from the notion
that bears eat the fruit with relish or because its berries
taste so rancid – I can see the sense
of adding Branston’s, but how do bears open all those jars,
or turn up on our Northern ground, in the first place?

Pictures of the plant show waxy-looking flowers,
gathered as bridesmaids, its fruit a letterbox red.
And I realise quite suddenly that unless I am transmogrified
into some kind of athlete, or the government makes it mandatory
for everyone to roam the moors, then lying in my bed
with books and the internet, is the closest I will ever get
to the wonderfully-decumbent plant that’s Bearberry.