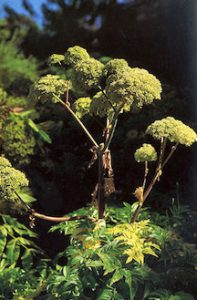 October’s herb is a beautiful giant plant: sweet-smelling and standing like a guardian angel in gardens across the world.

Native to Syria, this plant has spread and naturalized in cooler countries such as Denmark, Germany, Belgium, France and occasionally Britain. It can be found wild in damp waste places, often by riverbanks and has self-seeded itself for generations in several London parks and gardens, notably Lincoln’s Inn Fields and, until recently, has stood sentry on the slopes of the Tower of London.

There are around 40 varieties but it is only Angelica archangelica that is used in herbal medicine – mainly for respiratory disorders such as asthma, pleurisy, bronchial catarrh and fevers but it can also be used for digestive disorders such as bloating, heartburn, hypoacidity, and has had some success in cases of anorexia nervosa. It also has a reputation of improving vascular health and thus aiding in the prevention of arteriosclerosis when taken in the long term.

The stems are collected in June and July, while October is the time to collect the fragrant roots for use as a medicine…

Angelica is an ancient plant and is therefore steeped in folklore, stretching across many decades of human history. Its very name is a strong indication of its protective qualities against contagion and negative energies. Its old name was ‘root of the holy ghost’ and was used in ancient pagan festivals to ward off evil and disease. After the introduction of Christianity the name was changed to its present name of Angelica archangelica. Legend tells us that Angelica was revealed in a dream by the angel Raphael who told the dreamer it would cure the plague and was chewed to avoid infection. Today we can not agree with this claim but its healing properties do cover some of the Plague’s symptoms.

It blooms on the feast of Apparition of St. Michael (May 8th) which fortifies its reputation of having Angelic connections. The fragrant seeds of Angelica are used to flavour vermouth and due to their sweet smell are also widely used in perfumery. It will also lure a queen wasp to a trap in spring.

Today, this herb, which in the past was respected as a great and powerful plant, has sadly dwindled in our appreciation and is used mainly for cake decorations. How the great have fallen.

Here is a poem from my good friend Nadia Kingsley – who wrote this poem to mark the opening of the Roots to Health treatment room and shop, on the High Street of Honiton, on October 1st 2016:

There’s a woman I know
who wears her love with knowledge,
whose eyes smile a lot –
filling you with brightness like
the Harvest Moon on cloudless night.
I see her with a willow weave
heaping it with harvest – from
woods, fields and riverbank.
She walks the hills,
she walks the valleys.
I want to honour her – so,
with chopped up candied
emerald stems from aptly named
‘Herb of the Angels’,
I’m baking her a poem-cake.
Walking with purpose
she’s always remembering.
Knows how to use Angelica
in case of indigestion. Have a slice,
I say to her – she happily accepts.